Editor’s note: This blog is part of a series of guest posts from my social media students at Eastern Michigan University. Follow the conversations at #sm379 and @ginaluttrell.

We all know that celebrities make lots of money. As the general public, we are smart, as fickle and as sharp as the next viewer. Even if you don’t pay attention to celebrity gossip, or what’s happening in the pop culture zeitgeist, it’s easy to see that the Hollywood starlet on the surface makes $20 million a year, and lives in Malibu with the beach front property. However, where does the funding come for some of the side projects, the passion projects that theatrical or musical agents loathe, cause of the minimal commission checks? It comes from the growing media powerhouse that is known to many as Kickstarter. Kickstarter is a platform for everything media related and the funding that comes with it. Since their launch in 2009, they’ve managed to amass millions of people to pledge hundreds of millions of dollars to fund anything from the small independent film, to the recording of an album, to even the upstart author penning his or her first novella. Even celebrities have taken to the growing website to pledge for money. Rich celebrities at that. James Franco, Ricki Lake, (can’t believe she’s still worth 15 million), Bret Easton Ellis received over 200,000 to fund The Canyons. The independent movie shot on location in Los Angeles starring Lindsay Lohan, and adult film star James Deen in his mainstream film debut. Personally, I love the idea of rich celebrities pledging for more money like the panhandlers I’ve grown so fond of coming from Southside, Lansing. If I was a celebrity, you can bet your asses I would so do the same thing too. Kickstarter is known for pairing the backers with the creative to create. I hope this site becomes as big as I imagine if it cant get any bigger than it is already. The site is progressive and makes dreams come true, even if the dreams are frivolous, because not every project reaches it’s funding goal. TV star and perennial ladies man, Shemar Moore fell short a few hundred thousand of his goal to fund what I think was a TV series, but the video looked more like a cheesy informercial. Thus the project was stalled. Nevertheless, Kickstarter is a great site, and I hope to familiarize readers with this one, because progression is the key in this growing digital rat race we run everyday in America. 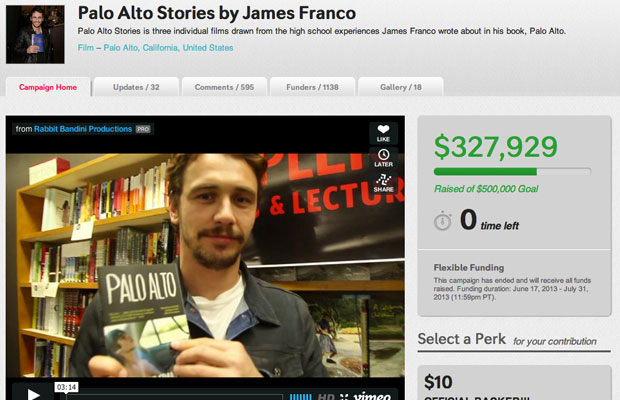 Like with anything there are pros and cons. Some of the cons outweigh the pros on Kickstarter also. For example, aside from the psychological ramifications that can arise after asking other people you don’t know for money, there’s a few others. One is that Kickstarter is going to take 5% out of your pledges, and Amazon will take another 2%. You’re automatically going to kick in 5% of your pledge goal? If you make it? That’s a tall order, and if your margins are slim, this could be a bigger loss than you want. Another one is that it’s hard to raise funds offline. You cannot pledge your own funds to your own projects, so you need to either put on a kick-butt fundraising drive, or you need to find a trustworthy third party to help you with offline fundraising. This becomes problematic because depending on your organization, or if you’re a local community based fundraising effort? you’re going to be climbing uphill.  The third one is that the all-or-nothing system from which also makes it great is flawed. That’s no secret of great technology, but the all-or-nothing process is hard to understand, and it’s even harder to generate an idea that will make money, and i mean seeing real profit.

The pros are the aforementioned all-or-nothing system, because it can work in your favor too. If the goal for funding isn’t met by the specified time no one’s credit card gets charged, and the project just fizzles out but you don’t lose that much. Like I said though the same thing makes it brilliant because 90% of projects that reach at least 25% funding go on to become fully funded projects. Also projects that deviate from the all-or-nothing format are not left out of the mix. The projects that might be harder to fund like the movies and whatnot, on Kickstarter, matching donations are encouraged on the site. This tactic is common in traditional fundraising where an individual or an organization pledges $X, but only if $X is raised independently first. So the way it could happen is a $50 donation with a $10K goal, could be matched by hundreds of other pledge donors on the site. Money gets raised and you have yourself a project.

Kickstarter is good for social media, and it’s not. It’s not viable because of one phrase. A fool and his money are soon parted.  In short, people are going to have a hard time about donating money to ideas and people they know little about aside from the pledge videos, and the pitches. It also works too because if you can manage your passion, honesty, and expectations along with a smooth social media campaign, then your idea can get funded, you will make money and be successful. http://www.kickstarter.com

One thought on “Kickstarter- Heard it Here First!”