Well, Keek is another word for a short look, glimpse, or peek.

Create & watch fast, short video updates with your smartphone, tablet or laptop and share them with friends. Simple to use, extremely fast and 100% free. Join the social video revolution!

But the Keek I’m referring to an up -and-coming social networking site. Functions of the app are similar to Vine and Instagram with some elements of Youtube as well.  Users, also referred to as a “Keeker,” create and post short videos — up to 36 seconds long — and share with their friends or the Keek social community. Like most social networking sites users upload their videos from the mobile app or from the users desktop webcam. You can follow other Keekers, like their videos, share them, and of course comment on them.

The relatively new social networking site has already amassed 58 million users. Each day 250,000 new users are added and what’s more, Keek is the top video app in 18 countries around the world.

Think another smart millennial developed this app? Nope. Think again! Isaac Raichyk, the 64-year-old genius is quite the anomaly in the social world. 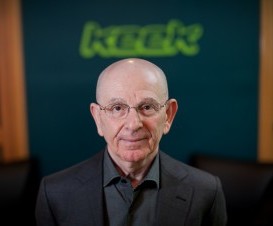 Yup, that guy! He’s the brains behind the Toronto, Canada based Keek social networking site. And he doesn’t see his age as an impediment either. He is quoted as saying:

“The truth is most people like the story: a regular kind of guy doing well with a social network, as opposed to some crazy 12-year-old,” he said. “I’m an emptynester. I can work 24-7. I have no distractions. And I’m feeling fortunate. I’m a 64-year-old living the life of a 27-year-old. It’s cool.”

I’ve checked it out and the site is pretty cool. Currently the top users of Keek are, of course, the social media mavens – Kim, Khloe, Kourtney – and British Olympic swimmer Tom Daley.

So the big question- will Keek become another giant like Twitter, facebook, or Instagram? Well, I’m not sure yet, but investors are really liking the company. In January Raichyks raised a whopping $18 million and currently Keek being valued at between $600 and $900 million.

My take – it’s definitely worth it to check out Keek!